Event: Legends of Bhangra
Details: Celebrate Canada Day at Pearson Convention Centre, 2638 Steeles Ave. E. at 6:30 p.m. The U.K. band features: Balwinder Safri, Johal Premi, Apna Sangeet, Heera and others, all of who are putting on the show for the first time in Toronto.
Contact: Here

Event: Festival of South Asia
Details: The TD Festival of South Asia returns to Little India, Gerrard India Bazaar, for another year. Popular stand-up comedian Vasu Primalni will co-host this year’s festivities along with Randy Persaud. There will be a rangoli competition, entertainment, food, a literary and visual arts features, concerts and more.
Contact: Here

Event: Festival of India
Details: Festival of India, one of Toronto’s most dazzling, summer events is here. The 44th Annual Festival of India (also known as Ratha-Yatra), organized by the Toronto chapter of the International Society for Krishna Consciousness (ISKCON Toronto) will be taking place as a parade down Yonge Street (beginning at Bloor and south to Queens Quay). Highlights include a vegetarian festival.
Contact: Here

Event: BM does Brampton
Details: Bollywood Monster Mashup, will present an uncensored side of South Asian entertainment at the Bollywood Monster does Brampton: A Stand-up Comedy and Urban Music Showcase happening at the Spot1 Grill at 289 Rutherford Rd. S. at 9 p.m. Tickets are $10 when purchased online and $15 at the door. Television star, Ben Mathai will be headlining the event, while comedian-turned-entrepreneur Amish Patel will be in the limelight as event host.
Contact: Here

This is part one of a two-part blog series. 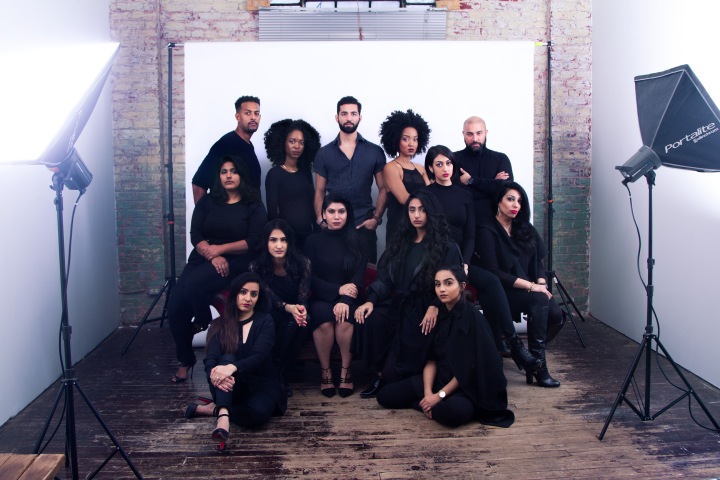 The cast and crew of hit web series Anarkali

Off the bat, I can guarantee one thing.

Watching one episode of the hugely successful web series Anarkali won’t do it. You’ll likely end up binge watching the entire two seasons.

The show will also stir a longing for your squad (if you’re caught in motherhood/career and your teenage years are a hazy blur).

The web-series created by the immensely talented Rakhi Mutta and edited by an equally competent Kiran Rai (lead actor/Anarkali) presents a vignette of a young desi woman’s life in North America. It’s told with humour, sensitivity, drama and melodrama.

The YouTube series is about  a devastated Anarkali (Kiran) who gets dumped by her fiancée Prince (Gavan Anand). The slow unraveling of her life and identity post-breakup, is the premise of the show.

So far, Anarkali has become an Internet hit in over half-a-dozen countries around the world with some 20,000 YouTube subscribers and 650,000 views.

“A lot of people think Anarkali is the story of South Asian girls dating because of the way it’s branded,” Rakhi said. “For me, it’s much more than that. It’s one woman’s journey to finding more about her self.”

Mainstream and ethnic media, Rakhi said, do not reflect the truth of brown women’s  lives when it comes to dating. This may be the reason Anarkli has wowed audiences world wide.

“I want to tell stories that people in my community, my family and my friends can relate to,” Rakhi said. “Stories that I never witnessed growing up, but I thought were critical.”

What’s worth underscoring here is that the cast and crew have produced a stellar product on a shoestring budget. Calling it a budget is bit ambitious. I am told, it’s a bartering system (pizza, as form of payment, as well as sustenance) .

Delivering a hit show with slow and clunky hardware and out dated software to me demonstrates class, substance and style. Just like athletes from third-world countries that win gold medals in Olympics wearing ratty shoes, Anarkali connects with the audience through pure storytelling.

“The way I portray certain characters, the lines I use and the conversations I include about stereotypes are all important to me as a woman of colour,” said Rakhi, who not only directs but writes the script. “For instance, in one of the episodes we had Anarkali and her friends dissecting Bollywood. Through that they talked about the feminist thought and what makes a feminist.”

In another scene, Roop’s (Amrit Kaur) boyfriend proposes to her and tells her to quit her job because he wants to take care of her. That gave Rakhi the perfect segue into discussing the independent woman (cough, cough, it’s Rakhi) who wants to make it on her own.

The complexities of desi women growing up in the diaspora are fodder for Rakhi’s pen. Each 10-minute episode tackles parental and societal pressures, boyfriends that come across as unqualified jerks, and a band of super crazy, loyal and fearless friends whose antics are never boring. 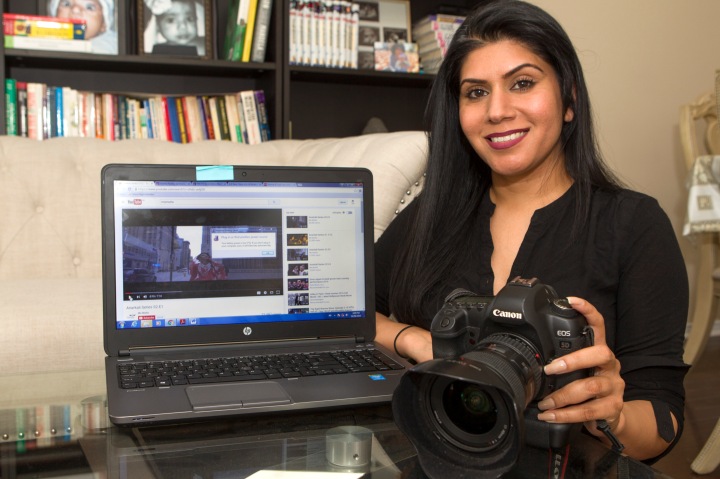 Rakhi Mutta, a filmmaker/photographer has been enjoying the spotlight after the success of her web series Anarkali. Photo by Bryon Johnson/The Brampton Guardian

Three women and a road trip

In Nov. 2014, Rakhi had plans to attend a Sikh feminist conference in Detroit. The organizers asked her to collect two other delegates from Brampton. The two turned out to be: Rupi Kaur and Kiran.

The radio lay silent and as the car ate up the miles, the three women forged a solid camaraderie. Once they returned home, they kept in touch.

Watching Kiran’s mannerism reminded Rakhi about something or rather someone.

The rest as they say

Rakhi shot the pilot episode of Anarkali in Feb. 2015 and then promptly sat on it for months because she was afraid it would bomb. Then, on Kiran’s insistence, she uploaded the episode to YouTube and waited.

To save face, Rakhi prayed for a minimum of 5,000 hits, but she was taken aback because the views exceeded her initial estimates.

Celebrations turned sour soon. An unscrupulous Facebook user scrubbed the credits from the pilot episode and uploaded the film through his Facebook account and disseminated it. The film spread like wildfire garnering some 32,000 hits, but no one on earth knew who had come up with the brilliant idea and the credit for the film becoming viral went to the thief.

The feminist in me salutes you

The well-fleshed and complex character was Rakhi’s own creativity at work. She detailed the life of every 20 or 30-something brown woman finding her way. The script caught dust as the filmmaker pursued a career in development.

“When I started travelling (for my development work), I wondered why the media did not tell me about these communities and their struggles,” Rakhi questioned. “Whose history is told? We know history is about ‘his’ story, so what does it say about ‘her’ story or ‘our’ story? The stories that were being told were often about the victor and oppressor, what about the other?”

This line of introspection led Rakhi to learn the nuances of photography. Shout out to her friend Natasha Daniel, who schooled her in the basics. Once she understood the lens, Rakhi found her calling. Her repertoire of works includes: Haneri, a film on mental health, an educational video on honour killings, Silent Struggles, that looks at elder abuse in the Punjabi Community and  of course, the fictional (Anarkali).

You can watch two seasons of the show on YouTube. Shooting for Season 3 will start soon.

Next time, we will profile the show’s heart and soul, Anarkali aka Kiran Rai. Stay tuned.