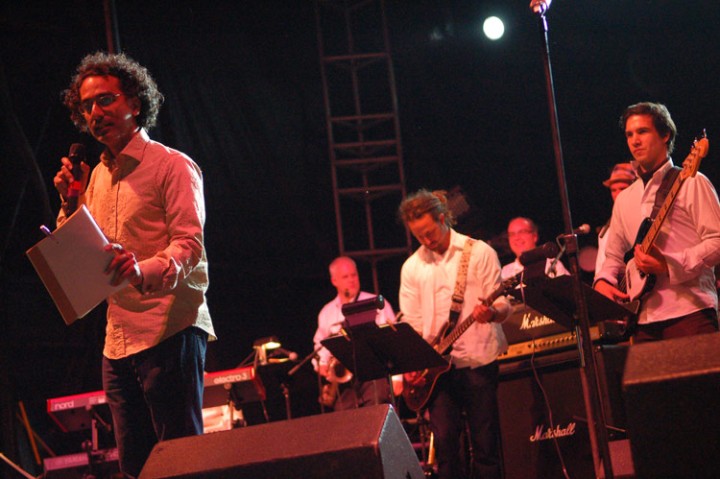 Have you noticed how animated some folks become when describing the antics of their child or a pet?

Picture that enthusiasm and multiply it with an outrageously high number to understand how invested Vikas Kohli is with the Bollywood Monster Mashup (BMM), an annual three-day festival in Mississauga, that he started six years ago.

(Wow, did I just use a Math metaphor?).  He also owns and runs FatLabs, a recording studio in Mississauga.

“I couldn’t have predicted how popular this festival has gotten in six years,” Vikas told TDD recently. “We continually have first-time performers in Canada, in fact, we’re at a stage where we’ve multiple headliners talking to us about wanting to be at BMM. People in Bollywood actually know about the festival now. How cool is that?”

Sound castles in the air:

For some months now, Vikas, the artistic director of BMM and an award-winning composer, has been furiously working on arranging the music scores for the orchestra portion of BMM Finale concert.

“People often ask me, where can they find the band that played at BMM and I tell them, it doesn’t exist,” Vikas said adding, each and every musician that’s part of orchestra was handpicked and invited to perform at the concert.

The string section of the Bollywood Monster Orchestra will play several Bollywood hits fused with other influences. Photo by Chris Scaini

On Saturday, July 23, the Bollywood Monster Orchestra and Mississauga Pops wind orchestra will deliver a number of retro Hindi songs with powerful string section and blend it with original scores created by Vikas’ musical sensibilities.

Vikas’ influences range from rock ‘n’ roll to jazz to hip-hop, metal and of course Bollywood. So, the sounds you hear will be unlike anything you’ve heard before.

Imagine arranging dozens of scores for a single event and then as the evening ends, the notes too disappear, never to be heard again.

“We create signature acts every year and no other festival does this,” Vikas said. “It takes six months of work and rehearsals to do this. I not only pick the songs, but also decide what kind of instruments to have on the stage. Then, I sit down and make musical charts for all the musicians.”

Once the band is assembled, they run rehearsals. That’s a lot of work for a free event.

The BMM Orchestra (Symphony Nights) on the main stage will include a traditional, classical European-string section delivering rich and beautiful sounds built on some evergreen Bollywood hits. We’re talking a 55-piece wind orchestra and 13-piece string one.

The three elements of BMM festivals:

Nurtured and encouraged by their families, Soumia Meiyappan and Sakshi Kanda, are each Movers and Shakers whose dads told them to simply go for it. I believe a woman’s first hero is her dad and when your hero tells you to grab a fistful of stars, you don’t question.
***

Brampton’s Soumia Meiyappan, 30, seen here with Alex Trebek, the iconic host of Jeopardy, a popular game show. The Toronto desi may be among the last batch of Canadians to take part in the show as Jeopardy has changed its eligibility rules.

I met Soumia and her wonderfully warm family days before a momentous event was set to unfold: Y’see, Soumia had finally made it to Jeopardy and the episode featuring her was about to be aired.

Soumia sat on her father’s knees watching the American game show Jeopardy since she was five or so. Since then, all she has wanted was to become a contestant in a show that has cult-following status here in North America.

Coincidentally, Soumia will be among the last few Canadians to participate in the show as Jeopardy’s not accepting Canuck participants anymore.

To anyone that’s unaware of the steps involved to get into Jeopardy, trust me, it’s not easy. The threshold of intelligence and general knowledge needed can be daunting.

Although Soumia did not win big bucks, she gamely shared her experiences of the process, behind-the-scenes, the thrill and the lessons (life).

By day, Soumia works as a research associate in family medicine at the University Health Network. Currently, she’s co-leading a study examining the barriers patients face in following up with their family doctor after they have been discharged from the hospital.

When she’s not doing that, she’s aspiring to check off few items from her bucket list.

Last month, when the iconic theme music announcing the start of Jeopardy blared and the stage lit up, viewers saw a smiling and confident Soumia ready for the challenge.

As the fast-paced game show began, hundreds of Canadians cheered for Soumia.

Soumia was initially a strong contender, until she got the category every Canadian dreads- American history. Many said afterwards, it was unfair, but a philosophical Soumia believes since Jeopardy is an American show, it understandably features U.S. centric content. Canadians, she said, are expected to go the “extra kilometre” when preparing. The American history proved to be her undoing. She lost in Jeopardy, but won in life.

“I have been watching Jeopardy since I was maybe 4 or 5,” Soumia said. “It was my dad who introduced me to the show and it soon became a weeknight ritual where we would watch and keep score between the two of us. I think it was that initial friendly competition between my dad and I that sparked my interest in the show.”

So, when she received the invitation to an in-person audition in Boston in September last year (after passing a rigorous online screening test), Soumia was ecstatic. She had auditioned for the show six years ago, but failed to make the cut.

This painting of Soumia as a Jeopardy contestant was rendered by her talented sister Pavi, an artist extraordinaire. Soumia Meiyappan is one of the last Canadians to participate in the American game show Jeopardy.

“This time around, I had had six more years of Jeopardy-watching and an audition under my belt, and I was a whole lot more confident,” she said.

Squeezing the buzzer on time requires quick reflexes and that’s a critical skillset to have in Jeopardy. Soumia practiced on ballpoint pens. She also schooled herself in ensuring her answers were in a question format because the Jeopardy rules demand that.

At the in-person audition in Boston, Soumia and 30 others had to answer a written test of 50 questions. Then, in groups of three, they engaged in a mock game with buzzers.

“This was really to see how we all played the game: did we project our voices well? Did we remember to phrase our responses in the form of a question? Did we seem nervous?” she said. “The coordinators let us know that they will keep us in the ‘contestant pool’ for about 18 months and that only if they wanted to call us to be on the show would they give us a call.”

Less than two months after her audition, Soumia received the nod to appear on the show. Before she left for Los Angeles, her friends and family gave her a piece of advice: just have fun and remember, it’s the experience of a lifetime.

“I loved every minute of the actual taping, which took place in Los Angeles in mid-January,” said Soumia who someday wants to travel and write a screenplay. “The show’s coordinators were all so enthusiastic and amazing at pumping us up and getting us ready for the show. We did not know who we would face, as that was determined right before each show started. However, unlike at the audition, where conversations between contestant hopefuls was cordial at best, there was a real camaraderie between us in the green room, now that we all knew we had reached our goals of being on the show.”

Alex Trebek, Jeopardy’s host is a fellow Canadian and it’s said many star-struck contestant that gawked at the host instead of answering  the questions were doomed. Our hometown gal Soumia is made of sterner stuff. She focused on the game, but nevertheless admits to being thrilled when Trebek introduced her as a “fellow Canadian.”

“I was so mesmerized by the beautiful studio lights and couldn’t believe how fast the game went by,” she told Toronto Desi Diaries.

Life after and the show

Soumia’s life, post-Jeopardy carries on. Even though she now knows how the “secret sauce is made,” she was afraid, the show would lose its magic. That has not happened.

“I am also fortunate in that not only do I have a Jeopardy-watching family, but can also count a number of colleagues as fans of the show – namely, Dr. Jeff Bloom, who is the chief family physician where I work,” she said. “Every morning, our conversation starts with ‘so, did you get Final Jeopardy last night?’ it’s akin to sports fans asking each other if they caught the game last night.”

On a side note: Soumia loves collecting snow globes. Her favourite  was the one she found in Sri Lanka. Who knew you could find snow globes there, she asks.

Stay tuned. In the next blog, Sakshi shares her secrets.