Volunteers of MuslimFest are the backbone of the hugely popular summer festival. This year’s event will run Aug. 2-3 at Celebration Square in Mississauga, Ont.
Photo courtesy of MuslimFest.

An ardent wish of every event organizer in the Greater Toronto Area (GTA) would be perhaps be this: to replicate the success MuslimFest.

In the summer of 2004, three organizations— Sound Vision, DawaNet, and Young Muslims Canada (which is no longer associated)— came together to put out their first event at the Living Arts Centre in Mississauga. That first year, the festival was largely vendor-driven event and included the wares of entrepreneurs who sold everything from jewelry, mouth-watering halal food, eye-catching hijabs and clothing. The event saw 8,000 people. Nine years later however, the festival became a magnet for both the young and the old. Attendance soared to 13,000 visitors.

“The idea for the MuslimFest came about three years before the first event,” said Lina Rahman, artist development and management and legal advisor for MuslimFest told Toronto Desi Diaries. “There was a meeting of minds on what we could do for the youth in our community and what is it that will unify our youth. There wasn’t really any major event in and around Toronto at that point that focused on youth engagement. The idea was for the festival to be responsive to youth. The response however was huge.”

Masses of people pour in for what has become a multi-day celebration of the art, culture and heritage of Muslims in the Greater Toronto Area. 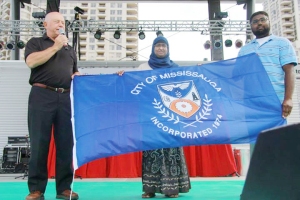 For the past two years, MuslimFest has been held place at Celebration Square in Mississauga to accommodate large number of people that gather. New components including acts by several stand-up comedians, performances by emerging and well-known artists and a vendor bazaar, all add to the overall appeal.

It would then be apt to say MuslimFest has successfully branded itself as an event that celebrates the diversity in the Muslim community through humour, food, art and entertainment.

“There are a couple of reasons that make this event popular,” Rahman said. “First of all, it was the first of its kind to address youth in the community, what I mean is although there were others, they were more religious in nature. MuslimFest focused on the creative side, which until then had not been addressed. Secondly, MuslimFest was able to bring the entire community together. It was always intended to be the representative of the whole community.”

Organizers have kept an ear to the ground and incorporated suggestions that came their way because ultimately the idea is to give folks something they enjoy.

To that end, in 2011, the festival invited stand-up comic Rabbi Bob Alper to headline at MuslimFest. What was interesting was that Alper was a perfect conduit to promote friendship between two cultures—Muslims and Jewish.

That year, the festival made headlines because of the tongue-in-cheek headline organizers added to their press release, which announced: 10,000 Muslims laugh at a rabbi.

“I was thrilled to receive the invitation to appear at MuslimFest,” Alper noted in a press release. “During the past seven years I’ve seen repeatedly how shared laughter diffuses suspicion and builds bridges between formerly unconnected communities.”

After it pulled off a creative coup with Alper, in 2012, organizers did not rest on their laurels. They sought to offer new attractions and artists by bringing in comic book creator Naif Al Mutawa the creator of THE 99; the first Muslim-inspired comic book and other Canadian and internationally renowned names such as Tom Vandenberg, Irfan Makki, Junaid Jamshed, Baba Ali Zain Bikha and Raef.

MuslimFest celebrated its 10th anniversary last year with some 26,000 revelers. If that’s not success, what is? 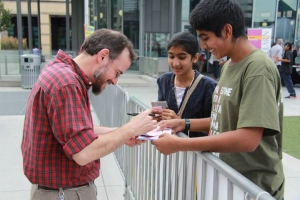 “MuslimFest is supposed to be a celebration of our culture, our art, our history specifically within the Canadian context,” Rahman said. “Our mandate is to build bridges. It’s not necessarily the element of fun or the carnival environment that brings people together, but comedy and food. We make conscious decision every year on who can we bring that’s not only fun, but would be able to speak to the wider community.”

Other cities and organizations have desperately tried to duplicate the success, but none have succeeded.

“It (MuslimFest) has broken stereotypes,” Rahman says. “The most important thing for all of us serving in the festival’s committee is: yes, we’re Muslims, but we are also Canadians…”

The 2014 MuslimFest is scheduled for Aug. 2-3 at Celebration Square in Mississauga.