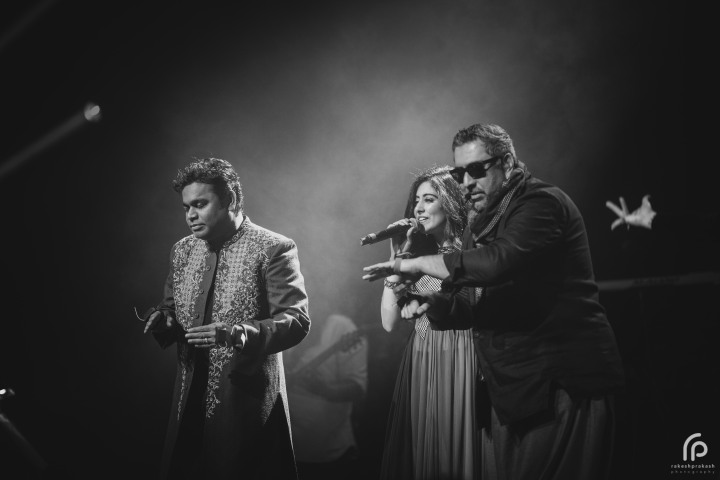 Jonita Gandhi seen here with AR Rahman during one of his stops in North America. A documentary film One Heart touches on the tours’ highlight. Rahman will also be performing a concert in Brampton, Oct. 20 at 7 p.m. at Brampton’s Powerade Centre, 7575 Kennedy Rd.

Juggling multiple projects with a wary eye on looming deadlines is never a good idea. I should know. I am swamped.

So, I have decided to work smart. Here’s news, in bite-sized chunks to tide you over until I can get to that in-depth profile.

AR Rahman will be stopping by Brampton, Friday, Oct. 20 at the Powerade Centre, 7575 Kennedy Rd. at 7 p.m. Grab those tickets now.

On a related note: Our own nightingale Jonita Gandhi on whom I have written numerous stories makes an appearance in a just-released documentary on AR Rahman on his North American Intimate Tour (NAIT) series.

The film, One Heart features in-depth interviews with Rahman as well as members from his tour and is playing in Cineplex theatres across GTA.

“Being the lead female singer on the AR Rahman North America Intimate Tour was an unforgettable experience,” said Jonita in a press release. “I’m so grateful that Rahman sir trusted me with the task of delivering so many of his hits live on stage. I learned a lot about myself as a singer and performer during those 18 shows, and I’m so happy that parts of it have been captured and presented so beautifully in One Heart for everyone to enjoy.

It was Gandhi’s cover of a popular Christmas song (the video was shot in downtown Brampton some years ago by her brother)  that caught Rahman’s interest. Soon after, he invited her to be part of his tour. 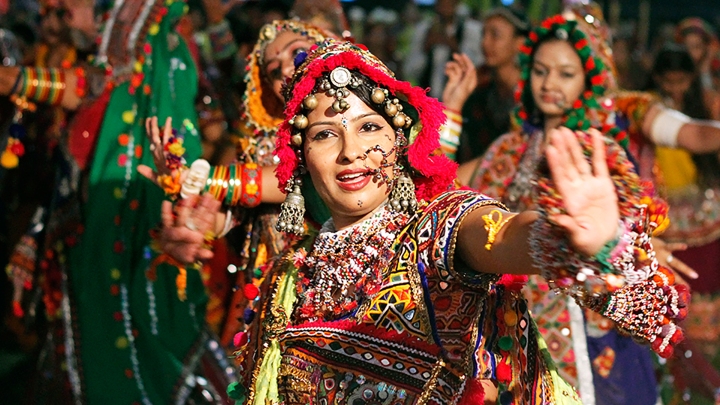 Desi Royals Entertainment is hosting Garba 2017 at the Hershey Centre in Mississauga, Saturday, Sept. 16 at 7 p.m.

‘Tis is the season for Garba.

Navratri (festival of nine days), celebrated by Hindus in India, signals to us that it’s time to roll up the sleeves and get ready to juggle rush-hour commute and office deadlines with some serious partying and prayers and rituals.

Here in Toronto, notice there’s an air of anticipation because the working mom and dads, dressed in business casual clothes from 9 to 5, toss them aside as soon as they get home to garb themselves in stunning ghaghra/choli, Kanjeevaram sarees, kurta/pyjamas and head to temples, homes, arenas for participating in pooja followed by dance and revelry.

So, on Saturday, Sept. 16, the Desi Royals Entertainment, is hosting its Garba 2017 at the Hershey Centre, 5500 Rose Cherry Pl. Mississauga at 7 p.m. It’s one of the biggest celebrations happening here in the GTA.

Hemant Chauhan and group will deliver string of Garba/Dandiya tracks to keep you in synch with your dancing partner. Interested? visit www.desiroyals.com.

Marriages are made in heaven, right? but weddings are more earthly and hell, need to be just perfect.

It’s pretty obvious that Suhaag: The wedding show clearly fills a much-needed service when it comes to your wedding needs. Mandap, clothes, jewelry, gifts, food, fashion and more catering to specific desi tastes. Those opulent sets are so awesome and intricate, you’ll want to get hitched, again.

Bit of house-keeping here: If you want your events included in the monthly events calendar, please send me the details, including where, what, when and who along with a high-rez photograph from previous years. Your listings must reach us a month in advance. Send the submissions to: toronto.desidiaries@gmail.com.