Red Baraat: The large, loud and over-the-top Indian wedding procession on the streets of India always lifts my spirits.

The ambience and mood of band of men, all dressed in regimented uniforms, accessorized with glittering brass buttons blasting Bollywood tunes and snarling the traffic says, “here’s life, seize it.”

If you’re nostalgic for the heady feeling of being transfixed on music that’s indescribable, yet so addictive, you’re in luck.

New York-based octet Red Baraat will take on the main stage at the Beaches Jazz Festival, Saturday, July 29 at 9 p.m. Brace yourself for never-heard-anything-like-this sounds that’s a fusion of jazz, hip-hop, rock and bhangra.

It’s obvious the eight-member group not only shares a passion for music but also has a dry sense of humour. Their albums—Shruggy Ji (2013), Bhangra Pirates (2017) and their name—Red Baraat have a touch of whimsical brilliance.

Sunny Jain (dhol/band leader/vocals) helps unravel the musical mysteries behind their brand in this chat.

TDD: How did you all meet and the story behind the name – Red Baraat?
SJ: I put the band together in 2008, having already been living and playing in NYC for 10 years prior to that.

I had the privilege of meeting and playing with many of the guys in different musical settings during my early years in NYC. When I had the idea for the band, I thought of the best combination of musical personalities and instruments that I thought would work.

The name (Red Baraat) comes from the musical inspiration and vision for the band: baraat and the Indian Brass Band tradition dating back to the 18th century. Red because that is the color of love, energy and revolution. 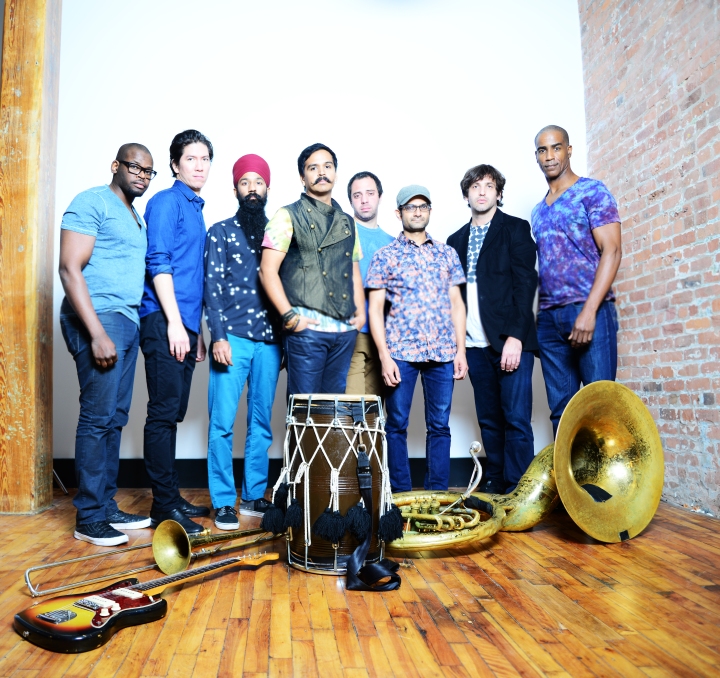 Members of New York based group Red Baraat will perform at the Beaches Jazz Festival, Saturday, July 29 at 9 p.m. Photo by Shervin Lainez.

TDD. How did the idea to fuse Bhangra with jazz, Latin and other styles happen?
SJ:  As a South Asian-American, I grew up with a variety of music from my cultural heritage: Jain Bhajans, Bollywood songs of the 70’s and 80’s, Punjabi music, Ghazals and Hindustani classical. Born and raised in America (Rochester, NY), I was also listening to what was on the radio and what my siblings handed down to me: classic rock, progressive rock, 80’s music, Brit Pop, hip-hop.

When I started studying drums and specifically, jazz music, my drum teacher (Rich Thompson) always told me to be open to learning and playing all styles of music. He cultivated the idea of a large musical vocabulary for the sake of versatility when improvising. So all of these experiences are reflected in my approach to composing and performing music.

Music and art is about expression and I’m always searching for the expression “OF” and “IN” the moment.

Thought and technique must disappear in the moment. The idea of genre and traditions must disappear in the moment. The only truth of the moment is the sound that comes out THAT MOMENT. Red Baraat’s sound is based on this idea and with that, each musician in the band brings their own musical personality into the full sound of the band. Each of them is a studied and deeply soulful musician, in their own unique way.

TDD: What’s the crowd’s reaction to your unique musical style?
SJ: Typical response is, “Holy shit, I’ve never heard anything like that before. Your music has [insert 5 genres of music] in it.” So yeah, I think people like our sound and our show. We’ve been touring solid for 8 years, with hardly any breaks.

TDD: How do you describe the sounds in Shruggy ji and to what do you attribute from the album becoming the portal to your success?
SJ: Shruggy Ji was our 2nd album that debuted at #1 on Billboard World Music charts in 2012. While we were very fortunate to have had that bump, we don’t necessarily attribute that album to our portal of success. We focus on the joy and passion we have for playing in this band. The songs. The fans. The cities we travel and the experiences we have. We’re very lucky and grateful for our old and new fans that support us.

TDD: Bhangra Pirates…what is the story/who is responsible for these quirky names? SJ: The music and energy of bhangra just seems to go hand-in-hand with the spirit of a pirate: rebellious, adventurous, wild natured. There’s also something to be said about Pirate Codes; the camaraderie, the support system among the crew. In fact, history teaches us that pirates were pioneers in democracy. Perhaps most importantly though, the Pirate Codes were revolutionary in their method of taking power away from any one man, and placing it in the hands of the majority. We kind of need some Bhangra Pirates in the States right now.

TDD: And is it a deliberate attempt to have these names. Who’s Shruggy ji? And the rationale behind the “Pirates?”
SJ: Shruggy Ji is a personality or character that we believe lives in all of us. As dusk approaches, we see our shadows lurking and slowly growing as night time falls on us. That’s the time our inner “Shruggy Ji” comes out. “Shrug your shoulders, and twist your wrists. Move your body and shake those ships.” We take time and thought into everything we do…the music we make, the song titles and the album titles. I think every artist does.

TDD: Any incident that you can reference that brings back a chuckle or a laugh or was kind of sobering?
SJ: I think we always laugh when people come to see Red Baraat and they are expecting us to be in colonial marching band outfits and play traditional baraat music. I love the Indian Brass Band tradition and have great respect for the musicians, but the colonial outfit represents just that, colonialism; something that directly affected my parents and family during partition. I’d never pay tribute to any colonizer. 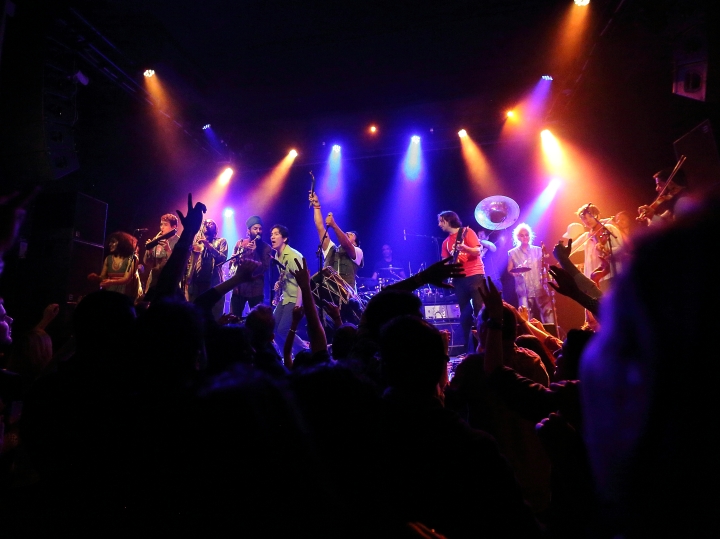