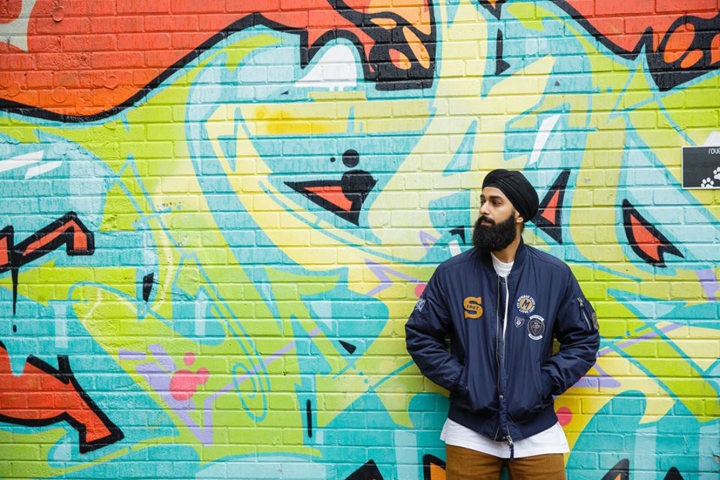 Amrit Singh aka “Noyz” continues to create waves in the hip-hop scene in Toronto. Supplied photo.

When you have to rely on tone, cadence and a stream of words, without a medley of instruments, you have to be pretty darn good at what you do.

That’s probably why Noyz seems to be on everyone’s playlist these days.

Having never met him, but just exchanged few emails and a phone chat, I can say with absolute degree of certainty Amrit Singh, 30, aka Noyz, a rising hip-hop star is not only a great wordsmith, MC, producer and mental health advocate, but Mr. Nice Guy: polite and modest to boot.

Two solo projects, a few albums created in collaboration with like-minded artists (God Degree, Grey Matter, Degrees of Freedom etc.) and dozens of concerts appear to have solidified his brand.

Early this year, Noyz dropped his first EP with B Magic (Movin’ Cool) So Far Gone.

“What makes rap such an effective medium is that the MC speaks in a conversational way, so as a listener, it’s as if you’re getting direct insight to the person’s thoughts,” he explained. “The lyrics are written in an honest way. So, you’ve to go deep into your own experiences to truthfully tell the story.”

Noyz began writing rhymes in Grade 6. He was influenced at that time by the music his cousins heard (Tupac, Biggie, Nas).

Young Amrit inexplicably was drawn to boom rap and R&B. (Boom rap, for those unfamiliar, is a style of production in the hip-hop genre. Drum sounds sort of dominate the music and hence the name.)

Phil Witmer, a writer for Noisey, an interactive music magazine, was at a Toronto concert featuring Noyz and B Magic and watched the duo bring the crowd to its feet.

“Their chemistry (Noyz and B Magic) resulted in an old-school-modelled presence that managed to transport the previously unmotivated crowd from the bar onto the floor,” wrote Witmer. “The duo prowled the stage as one unit, reading each other as they nonchalantly traded bars and emphasized the other’s punch-lines even on their own solo material. It was a block party, Brampton-style.”

30-year-old Noyz has experienced depression, but before he was handed the official diagnosis, he struggled with the symptoms and idiosyncrasies of a mind that well, had a mind of its own.

So, when he realized there was a need to educate the South Asian diaspora about mental health and remove the shame and stigma tethered to the issue, he used his voice. His video for #BellLetsTalk last year raked some serious views.

Growing up, Noyz admits to watching Bollywood movies, but he didn’t have the same deep connection with it as he did with hip-hop. His songs tackle oppression immigrant experience, mental health and what not.

“There’s so much space to be filled in a 16-bar rap verse that MCs have to go deep into their own minds and experiences to truthfully tell the story,” he said. “Because of the breadth of writing that needed for each verse, song and album, you get an insight into who the MCs are as people.”

When I was researching Noyz’s music, I came across a video of a Brampton Cypher. Cyphers are hip-hop jam sessions, BTW. Enjoy. Visit http://noyzhiphop.com/ for his music.