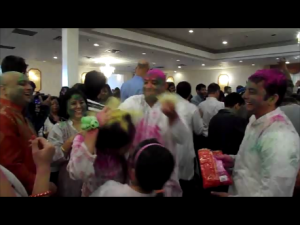 The KC Group Canada celebrated the festival of colours Holi in sub-zero temperature.

For years now, the KC Group Canada has refused to let the Canadian winter/spring come in the way of its Holi celebrations.

Holi is a festival of colours celebrated in most parts of India at the start of spring. The colour-run  can be compared to the La Tomatina festival of Spain, except in this case, tomatoes are not harmed in the revelry. In fact, there are no fruit or vegetables involved.

For Holi, masses of people take to the streets armed with water guns and coloured powder called ‘Gulal’ which they toss at one another. In the larger scheme of things, Holi gives everyone—adults and children—a chance to bring out their inner child.

In India, the festival is played outdoors, but here in Canada, the KC Group celebrated Holi indoors inside the National Banquet Hall in Mississauga.

Also, the play of Holi was restricted to a small area on the hardwood dance floor. It sure got cramped in the space as people jostled around. One can only imagine the horror on the faces of the cleaning crew should they discover the stubborn colour stuck to the carpet, furniture and upholstery. Nevertheless, despite the obvious limitations, some 300 people let their hair down and partied as if there was no tomorrow.

The KC Group Canada has been celebrating Holi and Diwali in Canada despite the fact that the realities of weather here along with combination of city bylaws dilute the fun a bit. Also, in Canada, organizers sanitize the tradition by making it all above board. 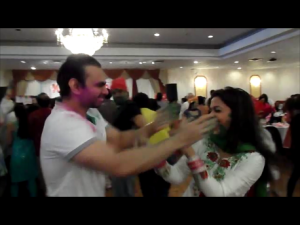 The KC Group Canada celebrated the festival of colours Holi at the National Banquet Hall in Mississauga.

Let me explain, in India, one of the staples of Holi is a drink called Bhang. Now, Bhang is a drink made from the leaves and flowers of the cannabis plant. Using a mortar and pestle, people smash the leaves and flowers and grind it to a fine paste which they incorporate into a drink. It’s not uncommon—in India— to see men completely wasted on Holi and looking comical with multi-coloured hues of gulal stuck the faces, hair and clothes.

As a South Indian, I was always envious of the traditions practiced in the North. Seriously, how cool is that you can get drunk on Holi and gamble on Diwali?

Food and drink aside, Holi is about dancing. No one can sing a Holi song better than Indian’s evergreen superstar Amitabh Bachchan. His deep gravelly voice has some kind of power. When I heard his songs at the KC Group’s Holi bash, I was filled with sheer nostalgia of the past. Ah, those were the days.