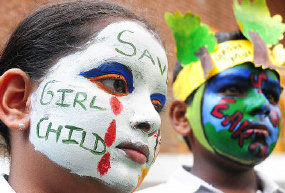 A girl gets her painted in Chandigarh, India to create awareness of the disturbing practice of female feticide. (Reuters)

Ladoos are a popular Indian dessert made up of chickpea flour, sugar and few other ingredients. Gifting a box of ladoos to someone means you are in essence sharing with them an occasion that warrants a celebration—engagement, wedding, new job and what not.

It’s customary to distribute these warm golden coloured sugary balls to neighbours and friends at the arrival of a male child, but when the wail of a newborn turns out to be that of a girl, in some homes, the news is greeted with a pall of gloom. The sub-text here is clear — a girl-child does not merit the ladoo. Her arrival is unwelcome. The girl child is considered a burden on her parents.

While the purpose of this blog is to present the cultural snapshot of South Asians in Toronto, it would be remiss of me, if I glossed over or entirely ignored the unsavory truths. These stories need to be told even though the reality may be unpalatable to some. Let’s talk about this elephant in the room —Female feticide.

The custom of aborting female fetuses is especially prevalent among some South Asians and Asians here in the Greater Toronto Area and in Vancouver. In India and China the issue is largely driven by prejudice, outdated practices and poverty. So, it’s inexcusable that, it’s allowed to happen on Canadian soil. I blame inadequate policies, affordability and the ease with which parents can opt for sex determination and abortion as the reasons why we are having this unpleasant conversation.

Let me begin by first observing female feticide is not exclusive to the South Asians, it’s disturbingly common in other countries like India, Korea and China where a male offspring is preferred. Along with all the other imports of tradition, this ugly custom, has somehow found its way here in the Greater Toronto Area (GTA) and that’s the sad part.

Two years ago, Toronto’s St. Michael’s hospital undertook a study: Sex ratios among Canadian live born infants of mothers from different countries and analyzed 766,688 births that took place in Ontario between 2002 and 2007 and found mothers, transplanted from South Korea and India were ‘significantly’ more likely to have boys for their second child. The report raised concerns that sex-selective abortion was happening right here under our noses.

Ladoo is a popular South Asian treat that’s given when a family welcomes a male child.

“Our findings raise the possibility that couples originating from India may be more likely than Canadian-born couples to use prenatal sex determination and terminate a second or subsequent pregnancy if the fetus is female,” reads the study, published in the Canadian Medical Association Journal.

Even though these numbers are telling, the silver lining on this dark cloud, is that sex-selective abortion is not — thankfully — a common practice here in Canada. Only a small percentage of people practice this vile custom. Even that will slowly change because changing demographics of the population in the GTA means the young and educated parents born and raised in Canada are rejecting gender biases. Many young women are raising awareness.

In my next blog, I will feature the heart-warming story of how a group of young women issued a clarion call to the community to reject old-fashioned customs and the rising groundswell of support for their cause.